Oh no the dingy

Well we had some excitement in the harbor yesterday.  First of all I need to state that dingy theft is prevalent here in the Old Harbor Mazatlan, but mostly at night.  Most of the boat haul up their dingy with either dingy davits on the back of the boat, or by way of their halyard or by the boom on the side of the boat.

Unfortunately our dingy is so freaking heavy we are unable to lift it up by any means mentioned above.  We have to first take of the motor and haul it up with our block and tackle on our missen boom and place it on the motor mount, just like we would if we were taking off for sea.  Then we swing the dingy around and place on the davits on the swim platform and then raised it up on the transom.  We have got it down now doing it night after night here in the anchorage, but with rolly water or to many margaritas it can be challenging. 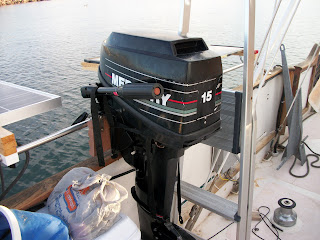 Well anyway yesterday when we were inside the cabin after hauling water back and forth from the dock to the boat we left the dingy tied to the cleat by a rope.  Somehow the rope broke and the dingy got free, the kids on SV Hotspur spotted it and sent to retrieve it, but they were too late.  One of the tour boats got it first, thankfully they did bring it back, but as expected they wanted money for it.  Plus they untied the anchor and took it onto their boat, we still have not been able to retrieve that.  Well we paid, and now we will definitely lock our dingy to the boat even during the day.

After we went to try to get our anchor back, we have to go in the morning the captain was not there, we decided to go into the Golden Zone to walk on the malecon and have some dinner at "Fat Fish" which is known for their two for one rib, shirmp, or steak meal.  We ended up having to walk about 3 or 4 miles, because we were not sure how far down it was after the malecon, it ended up being far.  But well worth it,  Jerry got the ribs, as did most everyone that was in there, but I orderd the breaded shimp.  The shrimp were good, but not as good as the ribs, they were awesome!! 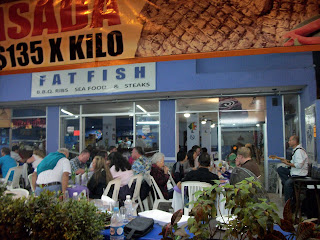