Well Jerry and I have been installing the solar panels for the 24 volt battery set up that our freezer is on. Now with 2 panels for the house batteries and now the 2 new ones we should be able to be very power efficient. While ashore we have continued tour around town. I found an eye doctor, after going to many, that was able to do an exam and order a years supply of contacts for me, yeah I can see again. He did a very thorough exam and since he spoke English really well I was very happy with the visit. On Saturday Marina Mazatlan held a swap meet, Jerry, myself, SV Tigger, and SV Goin South took the Toreo bus up to the marina. Since there are over 300 buses throughout Mazatlan, it is taking us a little time to figure out the system, but we are getting it. After the swap meet we had breakfast at Gus y Gus restaurant in the marina, along with a few other cruisers and SV Akupara. 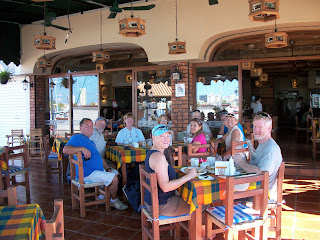 While walking through Viejo Mazatlan, or Old Mazatlan there is Plazuela Machado, a dozen or so lovely restaurants surround the plaza.

On Saturday evening Jerry and I took the Sabalo Centro bus that goes through the Golden Zone, a different part of town that is catered much more to the tourist with lots of restaurants and shopping centers, up to Marina El Cid. We meet up with SV Akupara, SV Far Fetched, where Jenny and Randy were crewing along with Steve and Andrea, and went to dinner at Ernies. 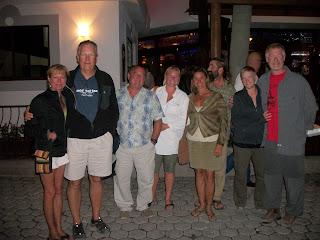 Of course we have been going back down to Playa Olas Altas, this so far is one of our favorite areas to have dinner and drinks. We eat one night at Cava de Leon, I had the shrimp stuffed chile rellenos, and wow they were the best rellenos I think I have ever had. The houses in Old town are all decorated with lights and blow up Santa’s, even though it is 78 degrees during the day, it is really starting to look a lot like Christmas.

well looks like some nice weather down there. san diego is under water. sacramento has cancer causeing chromium in ts water just like hinkly ca. (you know erin brokovich) isnt that great. we have had more water in the vally in the last 5 days than the las 3 winters combined, o were probably the next to be underwater after so cal. i havent been able to work since last thursday so its comin up on a week im going crazy. anyways thats what goig on here love the town your in thats gonna be on my list of places to visit. love you lots jeff jenn jennessa and jacob