Well we have been here in Puerto Chiapas for almost a week now and have really been enjoying ourselves.  The weather has been fantastic, warm with a slight breeze duing the day and cool with a slight breeze in the evening.  The only thing that I would complain about is in the marina the mosquitos are really bad in the eveing, but with enough spray and coils we are surviving.  On Tuesday morning we picked up SV Kona in the dinghy and went to the port captains office to check in.  After handing the lady all the paperwork, Guerrmo one of the managers of the new marina they are building, walked in and helped us with the paperwork.  The office was unable to do the money at the time so Guerrmo took us to the airport where the immigration office is to get our mexican visas.  After paying the migration officer 262 peso per person for the visa, Guerrmo drove us back to Puerto Madero where are dinghy was parked, and took us to a fabulous resturant for lunch. 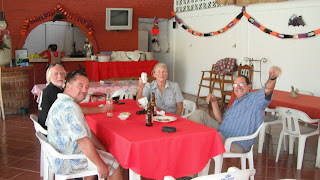 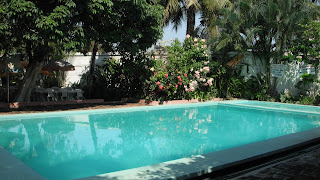 After we took the dinghy back to the boat, SV Kona and SOMF moved our boats over to the marina.  Jim on SV Against the Wind was aready in the marina, we tied up the dock lines a couple of slips down from Jim.  Now the marina is not officially open yet, they have no water or power or trash survice but the no slip fee it was ok.  The marina wanted boats to start staying there so they could get pictures and just for them to get the word out that they were opening in Novemeber.  The marina has 40 slips and will have a 70 ton travel lift and haulout facility.  They are building a restaurant, a laundry service along with a couple of little stores.  The marina is a little out of the way to go to Puerto Madero, but a short dinghy ride across the bay and you are there. 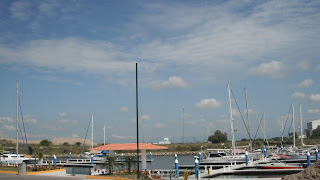 Joan and Tim on SV Kona and us took a taxi into Tapachula the large town about 20 miles away.  The taxi there was 250 peso, but I think if we would have walked to the street and waited for a taxi we could have bargin for a better price.  We had a great time walking around the centro area of Tapachula going by the church and into the centro market.  We then took a 5 peso airconditioned bus to the Walmart center and got some groceries, and a quick jaunt across the street to Home Depot and then got a taxi for 150 pesos back. 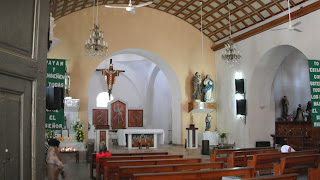 Jerry and I have gone over by dinghy to Puerto Madero a couple of times to get tacos at a little cart, we have been craving street tacos for a long time and I have to say for 6 pesos they are really good along with a 9 peso beer what else could you ask for.  The peso is at 13.00 peso to the dollar so 6 tacos and 4 beers for lunch we are paying $6.29 you can't beat that! 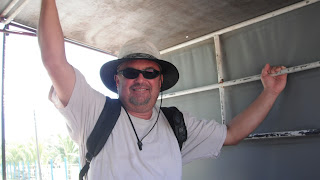 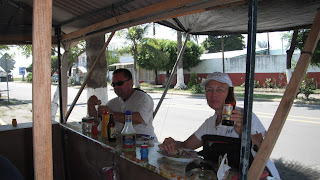 We always have to stop and have a couple of beers on the beach, this was one of our favorite places.. Brenditas, where Anna the waitress was always in a good mood, sometimes to good. 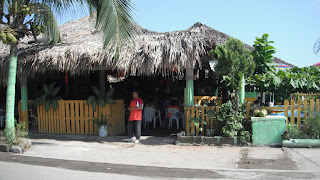 Well we finally have left the dock of Bahia Del Sol and are heading up 236 miles north up the coast to Chiapas Mexico.  We had a very very easy bar crossing leaving El Salvador, us and SV Kona left around 10am on the 22nd of October and had a 51 hour motorsail up the coast.  Both days and nights were perfect.  The first night was wonderful, you could imagine how many stars were up in the sky, I counted 12 shooting stars in my 3 hour shift.  And the sunsets and sunrises were some of the most beautiful I have ever seen.


Off the coast of Guatamala we did see about 12 shrimping boats around 6pm on the first day, but after that we had the ocean to ourselves.  It was one of the best passages every, we even got the sails up a little both days.  Unfortuently we did not catch any fish, we did hook a few, but none that were keepers.  We saw a few dolphins, but not as many as we usually do, but we did see tons of sea turtles, what a site.  The third day we were about 30 miles (about 6 hours) from Chiapas and our engine started to over heat.  We shut off the engine and put the sails up, but with 3 knots of wind we didn't do much.  About 30 minutes later Jerry went into the engine room to check things out, the engine fresh water heat exchanger did not take any water ( it would have taken water if that was the problem for the overheating), we turned on the engine and the temp immediately started to go back to normal.  The only conclusion we think is that we must have gone over a bag or something that cased the through hole to plug up temporaraly.

We pulled into the enterance of Chiapas around 12pm, there was a dredger comming our way so we had to turn around and wait for it to exit so we could pass.  We anchored around 12:30 and the Mexican navy came to inspect the boat and do some paperwork.  They left our boat and went over to SV Kona who anchored about an hour after us.  We then put the dinghy in the water to go to shore and try to finish checking in.  The Port Captian was closed so we had a couple of beer at a beach palapa and then went back to the boats.  We will try to finish checking tomorrow.
Posted by Sailor Jerry 1 comment:

Having Fun in El Salvado!!

Well we have been here in El Salvador for a couple of months waiting for the hurricane season to end so we can start heading up to Chaiapas Mexico.  We have done some boat projects, fixing the sun/rain shade after it got torn in the 60 knots winds that we had one night during a storm.  We have also started cleaning and reoiling the teak on the side rails, but for the last 8 days we have had none stop rain.  Here are some pictures of some of the activities that we have been doing.

September 15th was El Salvadors Independence day, Jan along with the school children on the Island put on a parade with music, banners and hotdogs at the end.  There were many activities all over El Salvador with the next closest in La Harradura, that had a parade and festivities. 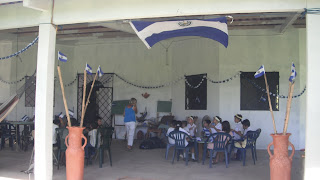 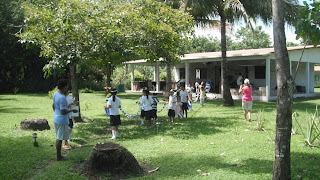 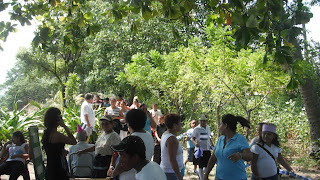 I have been helping Jan at the school teach english to the little kids.  There is school on the island up till grade 6th, but then after that they have to take "cayuca's" (little wooden canoes) across the estuary to the mainland for the higher grade schooling.  Most of the families on the island can not afford to send their children, or don't think it is important for them to go on to further their education.  Jan is trying to get more teachers to come to the island to further the education, but with all governments, it is a hard process. 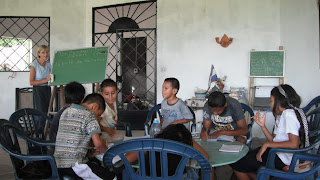 Talofa a tall ship from 1928 has been anchored in the estuary for a couple of months, Captian Cactas and Roni take out the ship for tours of the estuary for the hotel, and also have the island school kids aboard, where the whole crew dresses like pirates, the kids love it.  We have also had a few potlucks on Talofa, which makes sence since she is bay far the largest at Bahia Del Sol.

We have gone out to the stilt restuarants in the estuary for some good ol fried fish.  Where you bring cooler of beer and enjoy a great afternoon. 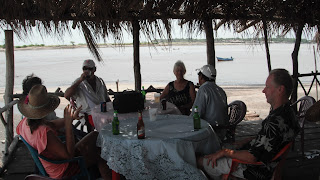 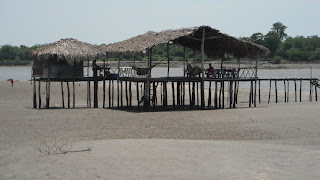