Jerry and myself have been enjoying Zihuatanejo, but this last week we have been having a little string of bad luck.  A week ago Jerry threw his back out while trying to get the dinghy back down to the water from shore, unfortuently there was no one to help, so the two of us drug it down about 20 feet.  Monday morning Jerry woke up and was not able to even get out of bed, it has been 8 days now and he is doing much better and even able to get off the boat, into the dinghy to take me to the pier to drop me off to go get some much needed groceries, while he stayed in the dinghy till I got back.  It is not 100% yet, and he might go see a doctor when we get up to Puerto Vallarta area, but until then he is taking it easy and we deffinetly will be looking into dinghy wheels.
So with Jerry not able to move of coarse few things had to happened, we had some large swells a couple of nights due to some rough weather outside the bay, we lost our side boarding ladder.  The dinghy was tied and chained up to the side of the boat, and somehow the ladder got pushed out of the brackets to never be seen again.  Well we learned our lesson, we heard it bounceing around, but thought that there was no way for it to come out of the brackets.  During the same rough swells the dinghy must of gotten pushed under the boat and the chain that we have locked to the outboard snapped one of the motor mount clamps off, but it looks like it is fixable with a little MacGyver type manuvering.  Thirdly the antenna tuner for the single side band radio got some water in it, back when we were down in El Salvador, and now must have corroded some of the internal componants and it will not tune correctly.  Then there is the generator, with the new raw water pump it was working great until one night we heard a clunck sound and noticed that it was not putting out any charge.  We quickly turned it off, then started to smell some smoke.  I lifted the floor board to access the engine room and a cloud of smoke rose out, Jerry new right away that it smelled like a fan belt.  Because Jerry is still trying to rest his back he has not gone in to give a thourogh assesment, I have jumped in and looked around and took some pictures, he is thinking that something caused the generator not to turn and burned the belt, probalby a bearing.  Looking at the specks in the manual it is fixable, but needs to be taken out and it weights about 132 lbs....wow, so that will have to wait till PV also.  So we are back to running the motor to help charge the batteries once and a while, good thing we are getting fuel today.

Other than that we are having a great time, playing a lot of cribbage (which Jerry wins alot..I think he cheats), and had an amazing dinner on the boat for Thanksgiving.
Posted by Sailor Jerry 1 comment:

Conserving Sea Turtles has become a widely known and popular project all over the pacific coast.  When we were down in El Salvador, right on the other side of our hotel was an area where the turtle eggs were protected to grow without the threat of predators, human or not.  Then when they are hatched and big enough, they are released back to the ocean.  I was lucky to have been able to witness this event a couple of mornings while on the beach
The other day, while Jerry, myself, our friends Joe and Jackie were out having some margaritas on the beach we got to witness a mom turtle coming up to shore to lay her eggs.  She was very causous about the journy up to shore, once she found a spot she liked she took here time digging a hole and laying here eggs.  Then after carefully covering them she sped back down to the water.  It was deffinetly a sight to see.  I did not take any pictures of this event, not wanting to spook her any more than she probably was, having the four of us around.  There were also some others including a guard to make sure no one stole the eggs before they could be collected to take to the near by area.
There are a tone of sites to learn more about this in Mexico and all over:
http://gomexico.about.com/od/adventureecotourism/a/saving-sea-turtles.htm 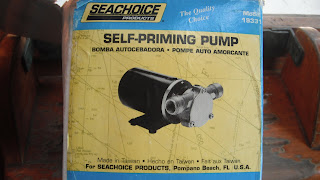 At the marine shop at Marina Ixtapa Jerry bought a new raw water pump for the generator, the old belt driven one got worn out back in El Salvador.  So besides the solar panels we were having to run the main engine motor to charge up the batteries once and a while.  The belt driven pump was positioned in the back of the sound inclosure around the motor, and was really hard to get to, so we did not replace that pump.  Instead we got a electric pump that could be positioned more to the front of the box, as long as the hoses reached.  We did have to change out one hose to make longer, and because it was electric it needed to have power.  For a temporary fix, Jerry hooked up a switch to turn on and off the pump, but the main thing to remember here is if the generator for some reason hickups and turns off, which it has done in the past, we need to tun off the switch within a minute to not burn it up.
All seems to be working well, we will need to put an oil pressure switch on the motor to have the pump automaticaly turn on and off.
Posted by Sailor Jerry 1 comment: 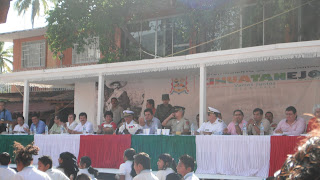 On November 20th Mexico celebrated the Centennial Anniversary of its revolution.  On this date in 1910 the revolutionary war to overthrow the dictator Porfirio Daz began.  To celebrate this festival schools of Zihuatanejo and of the surrounding towns participating in a parade, it started around 9 am went to 11:30am.  I can't even begin to think about how many children were involved.  It was fun to watch and enjoy this day with so many proud people. 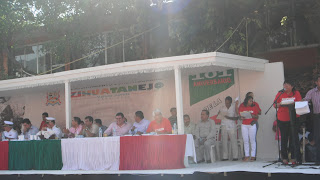 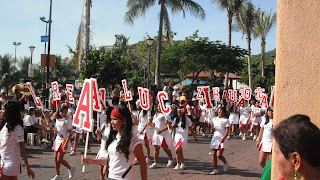 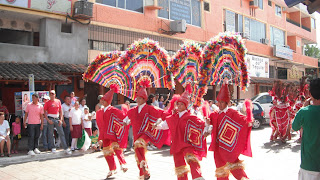 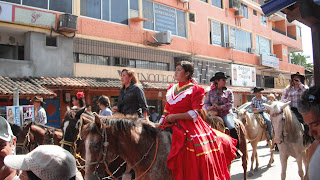 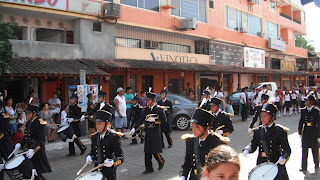 Hanging out in one of our favorite towns!!

We are really excited to be back in Zihuatanejo, there only a couple of other sailboat in the bay.  We had an easy check in to the port captian, there is a muelle (peir) for the fishing boats and the cruise ship shuttles, but unfortuently we are not allowed to leave the dinghy there.  So beach leanding it is, now there is hardly any surf in the corner where we land the dinghys, but because we have no dinghy wheels it is still quite a struggle to drag the heavy dinghy up the beach.  There are a couple of guys, Jesus and Alfanso who if they are around will help for a little tip, which for us is worth it.  We have been having a great time walking around the downtown and the centro market.  Skeeter and I have been running on a little path around the bay, that by 8 am expecially on the weekends is really crowded.


While having breakfast one morning we met a couple from Michigan on vacation down here, after talking with them a while we invited them to come have some beers on the back of SOMF one afternoon.  We had a great time with them, after we drank all the beers on the boat we went back to town to go check out some of the night life.  It was a Tuesday evening and there was not a huge night life going on, but we had a blast staying out till about 1am...I know what you are thinking...we are some party animals!!  A few days later we went over to their hotel to hangout out poolside and go have a nice dinner together.  They were a great couple and am so glad we met them, we wish them safe travels home.  ﻿


We took a taxi over to Ixtapa one afternoon to go check out the marina.  This is one of the largest and probably expensive marinas in Mexico, holding over 500 slips.  There was one little marine store that happen to have the generator water pump that we have been needing for $120 dollars, but more about that later.  We stopped at one of the restuarants in the marina and then took the bus back to Zihuatanejo.

We decided to leave Bahia Tangolunda and head up to Zihuatanejo the next morning on 11/8 around 10am to head 343 miles that took about 72 hours.  We had another great motor north with the wind on our nose and some strong current against us.  We were running the motor between 1500 and 1600 rpms and were averaging only about 4.8 knots over the three days.  We did not catch any fish, and again not with lack of trying and besides talking to SV Mita Kuuluu on the VHS we did not see any other sailboats.  We did have the Mexico navy traveling with us for a while, and of course saw many shrimpers.  We had a full bright moon the whole trip, it was pretty amazing! 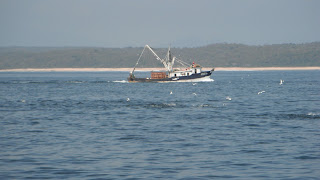 Seven cruisers, one from each boat including Jerry got in the back of Guarrmos truck to go and get checked out of Puerto Chiapas and pay API (the fee some ports have to achor) to prepare for our departure Saturday morning.  Supprisingly it only took them a couple of hours, that evening we had coctails on the back of Adagio, a large catermarane who came in the day before.  Saturday morning the navy showed up around 6 am to start the inspection process to be able to leave.  Even though we are not leaving the country we still had to have an inspection by the navy, I am guessing it is to check that we have not picked up any drugs to smuggle to other ports.  It took the navy about 45 minutes at each boat, then we all started our engines to motor out of the marina.  It looked like a parade of sailboats leaving one right after another, but it did not take long for us to all disperse out into the large ocean.  We left around 9:30am to head our 250.5 miles north to Huatulco and the big journy of crossing the Gulf of Tehuantepec.  We had an easy 51 hour motor across, we had one night that the winds we up to about 17 knots, but other than that, it was an easy, beautiful, almost full moon crossing.  On Sunday our second day out we had a couple of catch and release skipjack fish and got to listen to the Packers and the Broncos on Sirius Radio. 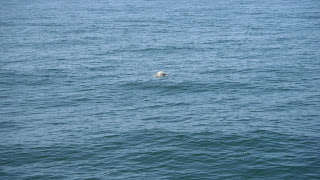 We arrived around 5:30am at Bahia de Santa Cruz, one of the nine bays of Hualtulco, and waited till sun up to motor in and drop anchor.  Unfortuently the area that we were going to anchor was pretty rocky and our anchor would not catch, so we motored out back down a mile to Bahia Tangolunda, where SV Luna Azul was already anchored.  It took a couple of tries but we got the anchor set, dropped the kayaks and had a great little tour of the bay.
Posted by Sailor Jerry No comments: