Jerry was able to recover the pictures I accidentally deleted...Yeah Jerry!!!  So here are some more pictures of your Costa Rica Travels. 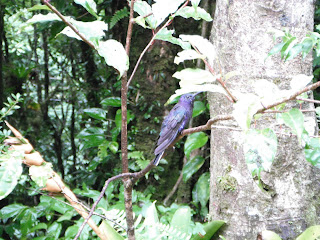 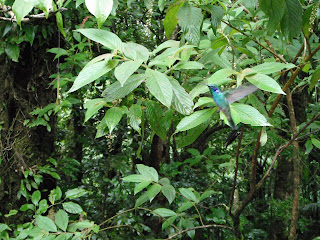 We set up a toured trip with Carlos from one of the many tour companies in Monteverde, he would pick us up at 7am and drop us back off around 3pm all for $40 per person.  He definetly pack in a full day, he spoke great english, had the best personality and was just a wealth of knowledge.  First stop was to check out some old ficus trees that have been wrapped around by other vines, that actually kill the tree leaving a hollow vines growing high up.

We then when to La Lecheria cheese factory, which is famous for its quality of cheeses.  Production began in 1953 when the original Quaker settlers bought 50 Jersy cattle and began producing pasteurized Monteverde Gouda cheese.  The cheese is still a mainstay of the local economy, and the Quaker organizaiton is still active in Monteverde.  But no Quakers walking down the road dressed like the guy off the oatmeal box. 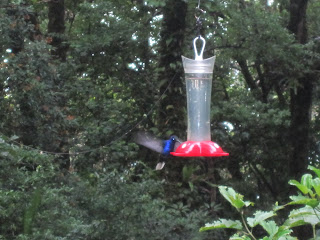 We then when to a hummingbird gallery where there were 6 feeders which attract hundreds of hummingbirds, they move so fast it is hard to get good pictures of them.  They had some of all colors and sizes, and boy are they beautiful.

We then took a long hiking trail up to La Casada, a triple waterfall that continues through the valley of the Rio Penas Blancas to Pocosol, about 20 kilometers south of La Fortuna. 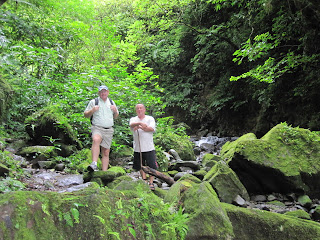 As true in form in Costa Rica it started to poor down rain on our way back down the trail, but luckely it quit when we got to La Bella Tica Cafe, where they have a coffee plantation and they harvist and roast there own organic coffee.  This is one of the only organic coffee plantation in all of Costa Rica.  The interesting way to know that it is truely organic is that they have bee hives in some of the trees (no pestisides). 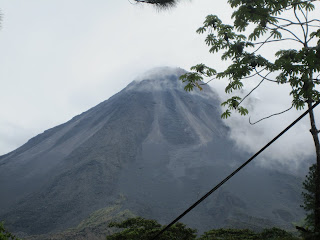 Costa Rica lies at the heart of one of the most active volcanic regions on earth.  Costa Rica is home to seven of the isthmus's 42 avtive volcanoes, plus 60 dormant or extinct ones.  First one we went to is Arenal (1,624m) which is Costa Rica's most active volcano, we were lucky we got to see it since it is usually covered by clouds.  We stayed in the town of La Fortuna about 15 kilometers from the volcano.  We went to Baldi Thermal Springs, where it was $28 us dollars to go to the 12 different hot spring pools and a buffet dinner. 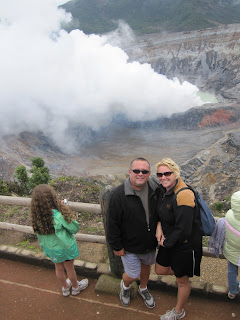 The next morning we got an early start to travel to Poas Volcano, which is a steep and rocky road up through coffee country.  Poas volcano lets you go all the way to the very edge of one of the world's largest active craters which is 1.5km wide.  The viewing terrace gives a bird's eye view of 320 meters down into the center of the crater.

We then headed to San Jose the nations capital which has like all major cities has a couple of cathedrals, a museum of Jade, a national theatre, a gold museum (which was closed for construction) and a bunch of park squares.


We had to drop Nancy off at the airport on the 28th, then we drove the long 6 hours back to Golfito where our boys were happy to see us!
Posted by Sailor Jerry No comments:

After learning you could pay Tim ( the owner from Land and Sea) an extra $10 an hour he will come on the boat twice a day and check on the boys for us, we decieded we would go on a 7 day inland trip with Sam and Nancy from SV Winfall.  It was hard to leave the boys for that long, but we had a great time.  First Nancy arranged a car rental to be at Land and Sea at 3pm on Tuesday June 21, to head 5 hours back up to Quepos (if you remember we stopped there by boat but did not anchor there).  I guess Sam has a lead foot, cause on our way we got stopped by the police with a radar gun ( that at first looked like a real gun).  He claimed we were going 13 km over the speed limit and wanted to give Sam a $500  US dollar ticket, he also wanted to give us a $700 US dollar ticket for Jerry and I in the back seat with no seatbelt, no one told us the rules.  Well with Sam's great fanagalling skills he paid the cop 3000 colones, around $60 to let us off the hook, but before he did, the cop showed Sam some tickets that he had written that day and yes they were that high and for all sorts of different offences, so drive like you are on your driving test when you are in Costa Rica.
We made it to Quepos just in time to find a cheap ($8 per person) dorm style hotel and get some dinner.﻿﻿﻿

The next morning we had breakfast at Blue Fin, which had an outstanding display of fishing tackle, and a great cup of joe. 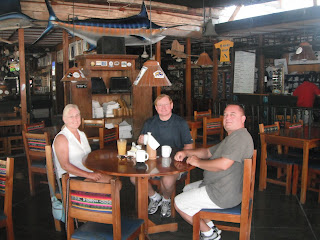 From Quepos we drove up to Manuel Antonio National Park, which is a 682-hectare national park that has it all from all different types of wildlife to stunning beaches.  It cost $10 per person to enter the park, but well worth it.  They have howler monkeys, capuchin monkeys, iguanas, toucans and scarlet macaws and about 350 squirrel monkeys live in the park. 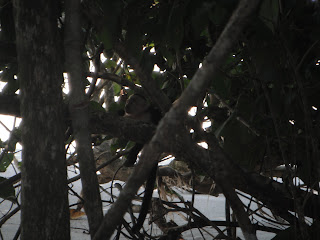 Monteverde means "Green Mountain", an appropriate name for one of the most idyllic pastoral settings in Costa Rica.  Cows munch contentedly, and horse-drawn wagons loaded with milk cans still make the rounds in this world-famous community atop a secluded 1,400-meter-high plateau in the Cordillera de Tilaran.  We first when up to Selvatura where we got to explore the canopy along the treetop walkways with three kilometers of suspened bridges.  And with it pouring down rain made it even more interesting, but we all did buy our first souviner, our $8 ponchos. 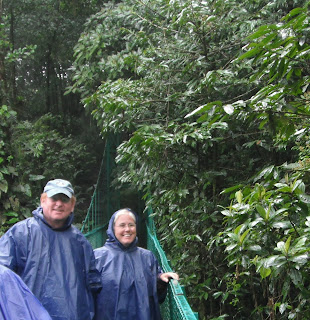 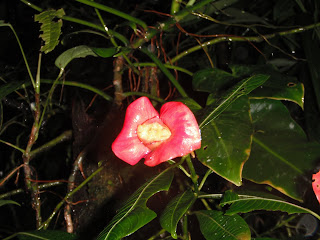 We then went to Jardin de las Mariposas (butterfly gardens) which featured a nature center and greenhouses representing the lowland forest and mid-elevation forest habitats.  Together, they are filled with native plants species and hundreds of tropical butterfies representing more than 40 species.  Costa Rica has nearly 1,000 identified species (approximentely 10% of the world in total) of butterflies, you can barely stand still for more than a minute without seeing a dozen of them. 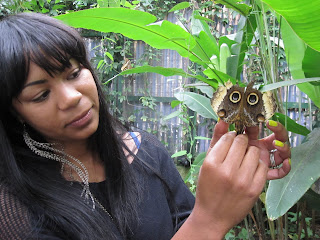 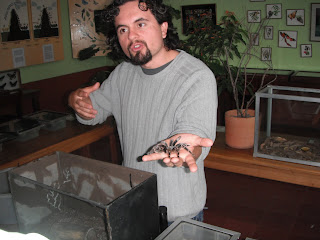 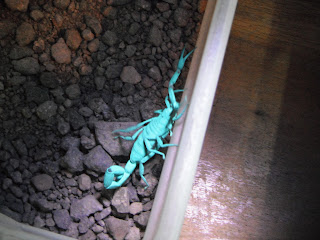 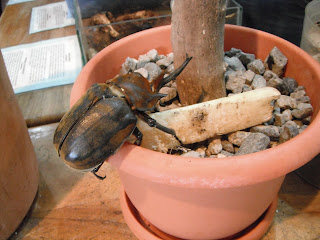 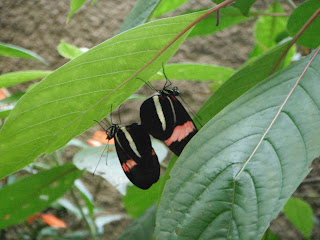 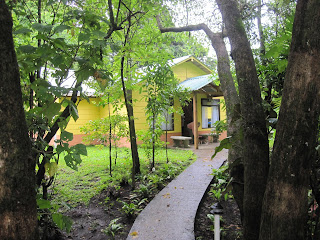 We rented a cabina for two nights while we were up in Monteverde, the family has owned the property for many many years.  They have about 6 different cabinas ranging in prices.  The property had sugarcane, plantanes, and they were even starting their own coffee production.