We are here at Bahia Potrero, we pulled in on 3:30pm on Friday the 27th and dropped anchor.  This is a fairly large bay with two mooring fields that were full.  We anchored pretty much in the middle of the two fields, we get some rollers at night, but other than that it is not a bad anchorage.  The town of Flamingo is were the first marina was started on the pacific coast in Costa Rica, unfortunately it is no longer here.  We do not know the story behind where they closed it down, but now it is just a large open (protected) bay behind a brake wall.  The Coast Guard has taken it over, so you are not allowed to use the dock for you dinghy (not that there is really a dock left), but there is speculation that someday they might reopen a marina there.  Flamingo is a small community with mostly condos and high dollar hotels.  There is not much as the way of stores, but there are a few restaurants and bars.  We had lunch at Maria's in the Plaza, it was good, a little on the pricey side, but I think most of Costa Rica is that way.

We are getting ready to leave at 12pm to head 100 miles southeast to Bahia Ballena.  We have enjoyed Potrero anchorage, hopefully Ballena is just as calm.
Posted by Sailor Jerry 1 comment:

We decided to pull up anchor at 3:30pm on Thursday the 26th after two very rolly nights and head 9 miles to Bahia Guacamaya.

We arrived at this small anchorage around 5:15pm and set anchor in 25 feet of water. There were plenty of room for us and SV Windfall, SV Veruna stayed another night in Coco. That evening we were invited over to SV Windfall for dinner and talk about the next couple of anchorages we are going to try to hit. Guacamaya was by no far as rolly as Coco was, but there were still some small swells that would hit us once in a while.

The next morning I kayaked to the beach with Skeeter, where I talked to a gentleman about the three tent houses and large glassed office slash common room. He informed me that as company in Chicago was trying to make this a little community, but due to the recession this was as far at they got. They rent out the tent houses and there is a groundskeeper that is there year round. The snorkeling was great, we saw an Eagle Ray, lots of larger fish, and Sam and Nancy even saw and octopus. After getting back to the boat, we rested and then pulled up anchor at 2pm to head 6 miles to Bahia Potrero.
Posted by Sailor Jerry No comments:

I was sad to leave our awesome anchorage, but it was time to move on, we needed to head 40 miles to Bahia Del Coco, the town El Coco to check into the country so we could all be legal. We had an easy motor down, no fish, but Skeeter and I did see a lot of dolphins.

We arrived and anchored in Playa Panama around 2:50pm on Sunday, we could not check in until Monday so we had a quiet evening on the boat after first jumping in the water to cool off. The next morning Jerry, Sam and Mitch all jumped into the dinghy to go to shore to start the check in possesses, and what a process it was. First of all, we were not supposed to anchor in Panama, we needed to anchor in Del Coco, but it looked to full for us to all fit. They first jumped on a bus to go to El Coco which was just a few kilometers away, but the bus dropped them off at the wrong spot, so luckily a cab came by and picked them up. After a couple of hours at the port captain, and then immigrations the cab brought them back to the boat where we waited for an inspector from the agriculture department to show up. Sam transported the inspector back and forth to the boat and after about a 2 minute inspection by dinghy back to the beach. The guys then had the cab come back and pick them up at 2:30pm to go back to the Port Captains to get their paperwork. They then were told that the next morning they needed to go to the town of Liberia to customs to finish the checking procedure. The next morning they met the cab driver at 8:30am on the road off playa Panama and headed 25km to the town of Liberia. When the three guys got back to the boats, we decided to go move to the anchorage at Del Coco to be closer to the little town of El Coco. So around 12:00 pm we pulled up anchor and motored the 2 miles to Del Coco, which the anchorage was quite full, but the three boats found room near the northern most part of the anchorage. That evening since it was Sam’s birthday we went ashore and had dinner at Beach Bums Bar and Grill. 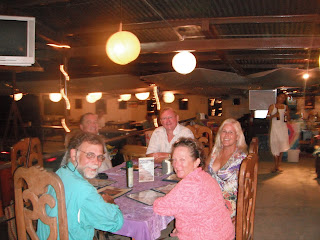 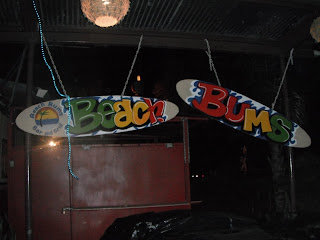 We had some great food at a pretty reasonable price, we then pulled back off the beach, which was not as hard of surf landings like some that we have had, and headed back to the boats. The anchorage was rolly, probably one of the worst rolly anchorages that we have been in. We stayed to days going to shore for some provisions (by the way, they use colones currency money in Costa Rica, and 500 colones equals 1 US Dollar…so imagine trying to do some major provisioning) and some shopping and had breakfast at Woody’s that had 7 dollar buffet breakfast.

Well we left Bahia Del Sol El Salvador around 9am on Wednesday May 11th. We had an exciting bar crossing. Bill from Mita Kuuluu did not go out with Rajelio on the jet ski to guide us out so we do not have any pictures of the crossing, but we did get one good wave over the bow sprit. We had a great motor sail down to Bahia Santa Elena, it was about 236 miles in 46 hours. We did have a little storm the first night with winds up to 27 knots and about 2 hours of light rain. But the next night we had an easy passage, we hooked 2 sailfish and they both broke of the lures, we hooked one mexican barracuda who bite off the lure with its very sharp teeth, one jack corvell that we released and 3 dorado, one we kept, one we released because it was just a tad on the small side, and one large bull who broke free. So for the one good size bull dorado that we caught we lost 4 lures, well he sure better taste good for 40 dollars. It was all fun though, so no worries. 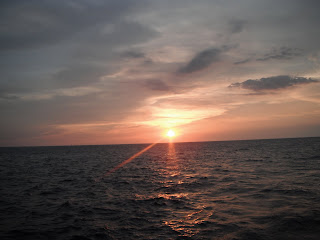 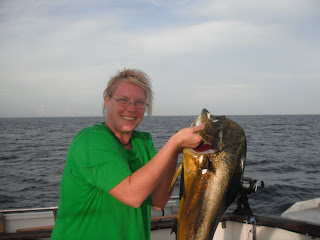 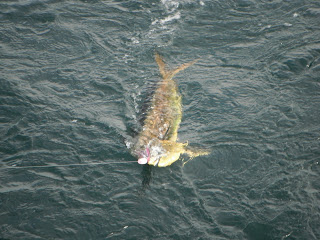 We arrived in Bahia Santa Elena around 8am Friday the 13th, SV Varuna arrived about 1 hour ahead of us and SV Windfall had been there for about 5 days. What and amazing anchorage, there was a large anchorage at the northern most part of an even larger bay. The water was about 82 degrees and clear, we had a great time snorkeling almost everyday. There were about 5 different hiking trails around Santa Rosa national park, with thousands of butterflies species, 5 different species of cats, and parrots, and even monkeys. We took a hike up to a waterfall that had small little pool at the very end that we all swam in. Sam brought a gold panning pan, which was fun; we even found a few little flakes. 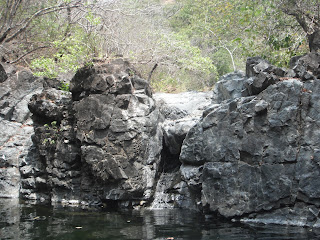 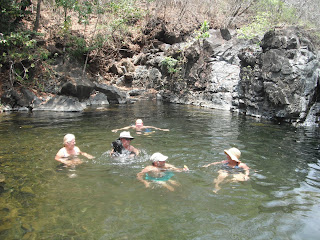 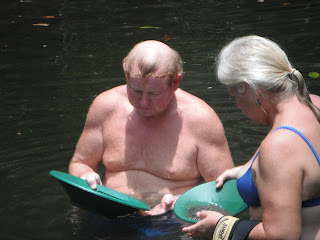 Nancy, Skeeter and I went on a longer hike and saw about 5 monkeys up in the trees, it was awesome. 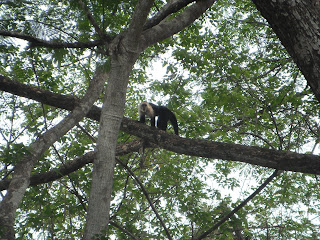 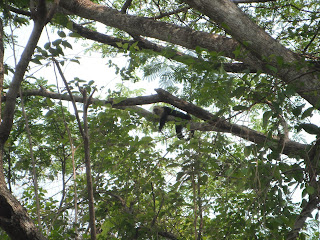 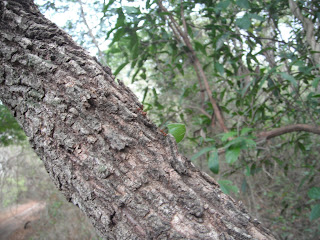 We took a few other hikes with the group; oh did I mention that we had a couple of heavy rains, so the trails became quite muddy. 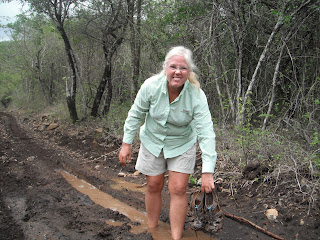 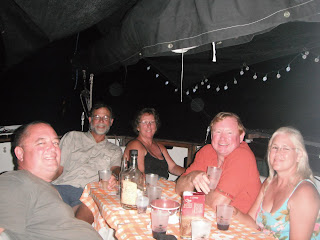 TIME TO MOVE ON!!

We have really been enjoying our time here in El Salvador and in Bahia Del Sol.  Between the 13 volcano's, the Ruins, the Coffee, the beautiful beaches and good surfing and especially some of the nicest people that you will ever meet, I know that El Salvador will soon be a very popular tourist destination.  But it is our time to head on.  There is one other anchorage in El Salvador and 2 main anchorages in Nicaragua that we will be skipping and heading straight to Costa Rica. We will be traveling 230 miles east to the anchorage of Bahia Santa Elena in Costa Rica.  This is where we are hoping to meet up with SV Windfall who left last Friday.  SV Varuna is also traveling down the same time as us, so it will be nice to know that there are other people.  We have one big task left, crossing the bar for the second time.  Our crossing coming into Bahia Del Sol was simple, so lets hope for a nice easy exit crossing.  The weather for the next three days look good, hopefully a little wind to do some sailing, but nothing to write home about.   Well we will catch up with you all in Costa Rica. 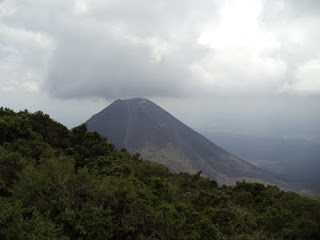 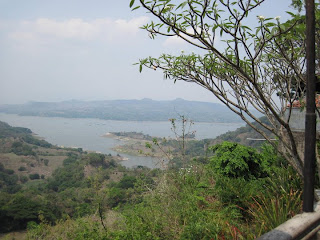 Jerry and I have accomplished some much needed boat projects.


We even tried to attempt to find where the starboard water tank is leaking from.  After completely draining it we looked inside ( as best we could) to see if there were any noticeable cracks that were leaking.  After some thought,  we think it is baffle that has come loose, so when it is full it starts to bulge and then leak.  We have decided to wait till Panama where we can get some fiberglass repair done.  It still works, so we just filled the tanks 3/4 full, so we still have 360 gallons of water, which is plenty and we have a water maker.   ﻿ ﻿

Now don't we worrying about us not having any fun, we still have enjoyed the pool and the social life here at Bahia Del Sol.

We took another trip into San Salvador for provisions and other odds and ends.
﻿ ﻿