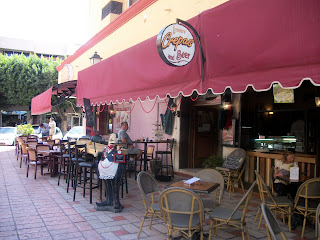 A few things Jerry and I have been up to here in La Paz, we had lunch at a crepe place that we knew about because SV Oceanis 2, who we met in San Carlos, the son owns it. 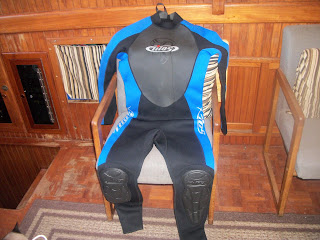 After walking around all over La Paz for the last couple of weeks we found a ferre-mar that has good fishing and diving supplies and for a Christmas present Jerry got me a full-length wet suit.


Well it is Monday morning; Jerry has been up in the state for the past 4 days while Skeeter, Shiraz and I have been taking care of the boat. We went through a big northern blow right before Jerry left, but the weather has been great, it gets cool in the late night early morning but around 84 degrees during the day. I have been getting the boat cleaned and organized since finishing the solar panel project, and we sold the sailing dingy so we have more front deck space, but had to do a little reorganizing for storage. I have been finally getting into the Christmas spirit by playing Christmas music and putting up our decorations, even though I will have to take down some of them for the crossing to Mazatlan. 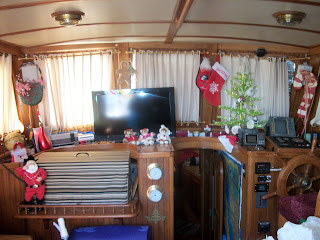 The day that Jerry left I decided to ride my bike to Walmart which is about 2 miles but one the way back, due to lack of eye contact, I was starting to cross the street and a car pulled out and knocked me and the bike over. Everything was fine, but because of the language barrier it was embarrassing trying to communicate with the woman. I really need to work on my Spanish. I have been invited over to SV Akupara for dinner a couple of nights one night Kate made sausage and sauerkraut yummy, and another night along with Dave and Janet on SV Cuervo Kate made her famous tortellini soup. But this time she made her own Italian sausage, wow what flavor it had.
Yesterday the La Paz club cruceros put on their annual December Subasta that was a large auction and bake sale for a children’s foundation, raising money for Christmas. I gave my support by buying a couple of beers, but Dan did buy some dingy wheels from the live auction. They put on a great event and had a large turnout.

Well Jerry should be back tonight, then tomorrow will be a day of provisioning and getting the boat ready to leave La Paz on Wednesday morning to start heading to Mazatlan…Yeah!
Posted by Sailor Jerry