Hope everyone had a very happy new years. After I finally went and tracked down the captain on the tour boat that had our dingy anchor and finagled with him stating I was not going to give him any more money, we started a few little boat projects.  We finally got the old 12 volt batteries off the boat and gave them to the workers on a navy surplus landing craft.  Since they still work, just 10 years old, they were happy to receive them.  We also took a pulmia to get two jugs of dingy fuel and three 5 gallons jugs of purified water, after getting them on the boat we decided we were ready to start celebrating the upcoming new year.  Enjoyed a few cocktails on the boat while playing a couple of game of cribbage then got ready to dingy back over to stone island anchorage to enjoy new year festivities with other cruisers at Benji's Pizza.  We had a great time eating yummy pizza and drinking tasty margaritas.  They had music, party favors, and a nice bonfire, it was a great time! 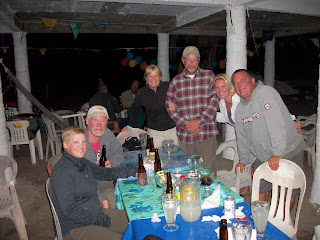 We left around 10 pm, which was good because we had to dingy back over to the old harbor and get the dingy mounted up on the transom while we were still able to, if you know what I mean.  We made some phone calls to family and friends and finished the night drinking Becky's famous pain killer cocktails and watch the fireworks from the boat at midnight and went to bed.


Today has been a day of doing absolutely noting, a couple of sailboats were going to leave and start heading south, but do to the wind and swells out on the sea they decided to head back in.  We are thinking of leaving on Monday of Tuesday for San Blas which is about 120 miles south of Mazatlan.  Jerry and I have been thinking of going to El Salvador this season instead of heading right back up to San Carlos.  Below is a website about the cruisers rally, we will keep you posted.
﻿﻿ http://elsalvadorrally.blogspot.com/
﻿﻿ 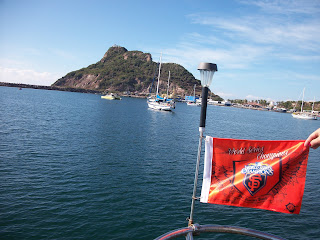