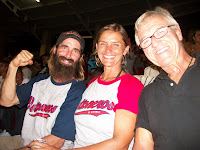 Jerry, myself, John on Magus, Randy and Jenny on Mystic attended the the Ostioneros de Guaymas ( The Oyster Catchers)  verses the Marineros de Ensenada baseball game last evening.  It was also Jenny's birthday, and on a side note Randy and Jenny are from Stockton California, wow what a small world.  The Ostioneros were the 2009 League Champions and are trying to do it again.  Unfortunately the Marineros are leading the series by beating the Ostioneros 3-2 on the 4th and 7-3 on the 5th in Ensenada and yesterday 14-4 in Guaymas.   Even though the home team was not winning that did not stop the fans enthusiasm, we were sitting in the front row by the walkway of a sold out stadium.  These people sure do like their Mexican baseball everyone was standing, cheering, singing and even dancing all night long. 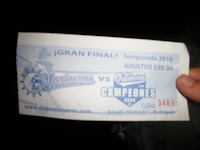 It cost $50 pesos a person to get in and $15 peso cervesas, now that is not like baseball stadiums in the States.  They also had food and merchandise vendors, Jerry and I shared two carne asada tacos, peanuts (which are not salted here, probably healthier for you, but not as good,) and three cut up sausages with a bbq and chili sauce on them all for $50 pesos. 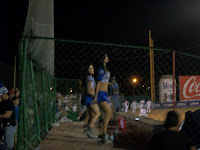 The cheerleaders were cute girls in little Corona outfits and the ushers were cute girls in Coca Cola outfits ( and when I say little I mean LITTLE) so I am not sure how much of the ball game Jerry actually watched...Just Joking!  I am not exactly sure about their mascot, it was a man dressed in the Ostioneros uniform wearing a Mexican wrestling mask, but he sure did get the crown excited running up and down the aisles.  There were vendors walking around the aisles, beer in Pacifico buckets with ice and candy being held in boxes.  It was such an exciting experience, the only down side was that it was hot, hot, hot, but I guess that's the price you pay for a cheap and fun event. 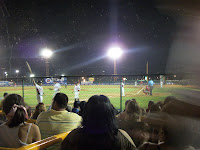 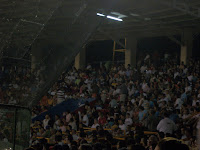