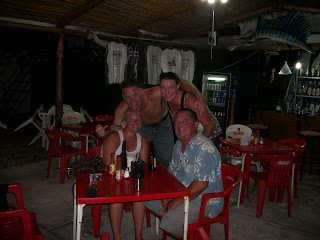 So our friends Steve and Cheryl came down last week to visit us from our hometown Stockton Ca. They had a long 18 hour trip so you could only guess they were hungry and ready for a beer when they got here. Jerry and I have not seen either one of them in almost a year, I was very excited to see Cheryl because I did not know she was coming down with her brother, I even cried a little. That evening we went to JJ’s taco stand which was a blast, beers tacos, “who care’s” as JJ himself would say. After we all finished our fish tacos and Steve finished his very large burro (burrito), we took off and stopped over at a bar called MrMugay (sp ?) and had a couple of beers before we went back to the boat. The next morning we went to breakfast at Tequila’s then went and provisioned for the upcoming trip up to Los Cocinas again for another three-day trip of fishing, snorkeling and swimming. That night we were invited over to our friend Alexis’s place were here dad cooked the best and largest shrimp scampi in the world (in my opinion), then after Cheryl and I went to captains club which I had many many cocktails, and Jerry, Steve and our friend Alex went elsewhere. We left the next morning but before we had some tie downs to do and to say the least I was hung over, but we got it all done and pushed off from the dock. I went down to the galley to start cooking some breakfast and as soon as we got out of the bay it started getting rough, Cheryl was trying to make bloody mary’s up on the deck, but both were very challenging. 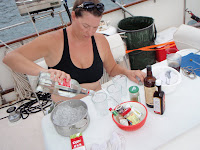 I only got two plates made and never even drank my bloody mary and Cheryl never was able to make one for her. After I freaked out a little, due to everything inside flying around and Cheryl getting sick, things started to calm down once turned north toward the anchorage. We caught two mexican bonitos and one really small dorado, we threw back the dorado, but kept the two bonitos. I filet both the fish so they would be ready for dinner tonight. 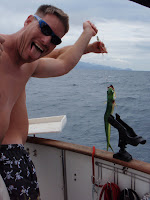 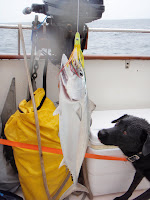 The rest of the trip up was nice and smooth a little overcast but we all got a lot of sun. Once we got in the anchorage we found our spot to anchor which was much closer in toward the rocks this time, we all jumped in and went swimming. 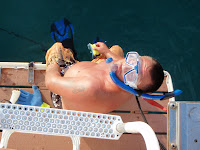 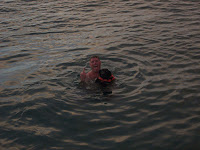 The first day was full of swimming and snorkeling; Jerry made hamburgers for lunch and the fish that we caught for dinner. After dinner I got the poles ready for Steve and Cheryl to do some night fishing. I felt like the deck hand going back and forth between the two batting their hooks and taking of their fish, but I really enjoy doing that anyways. Steve caught a little eel and that was one that I wouldn't touch, any thing that can wrap around your arm is a no no for me, so Jerry had to take that one off. 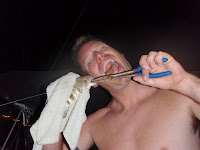 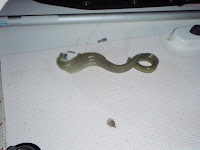 That night we all slept up on the deck because it was really warm out, Jerry, Steve and Cheryl slept on mattresses on the cabin top and myself and Skeeter slept on sleeping bags on the foredeck. The next morning Jerry and myself made breakfast and once again we all jumped in for another day of swimming, snorkeling, and spear fishing. 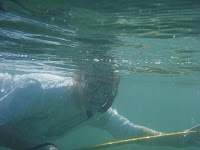 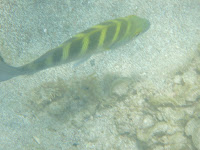 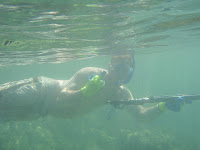 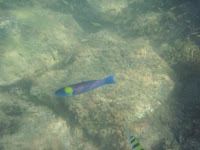 It took all day but Steve finally speared a fish with the gun, and Cheryl almost caught one with the spear pole. That night we had steaks for dinner and another night of fishing, we all went to bed a little earlier because we were going to be heading out the next morning to head back to San Carlos. 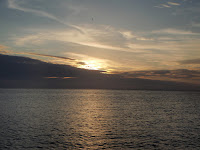 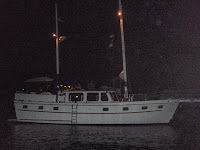 The next morning Cheryl made us all breakfast burritos and I cleaned up before we headed back. We had a great trip back, there was a little wind on the bow but everyone did well, so well that they all took naps. We did have a little excitement when we hooked a sailfish, it took awhile to bring him in and release him, but with all the help we finally were successful. 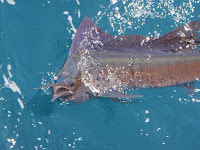 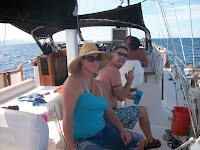 We got back to the dock that afternoon and tied up SOMF and washed all the fishing poles and lures as well as the snorkel equipment took showers and headed to Los Arbritos for dinner and had a dozen large raw oyster that were only 85pesos (cheap and good what else could you ask for). That night Jerry and Steve went out and Cheryl and I went up to Captains Club for some drinks and to get on the Internet. The next morning we all slept in and once we got ready it was time for lunch, so we headed up to our new restaurant in town Five Palms, and due to the heat we all went back to watch a movie and hang out in the air-conditioned boat. That night we went back to JJ’s for some more fish tacos for dinner and then had a few drinks at Ruby Wine Bar. Then on Saturday morning Jerry cooked breakfast and after just hanging around the boat because it was to hot out to do anything, Steve and Cheryl decided to head home. We all said our goodbyes and I have to say it was another successful trip on SOMF. I think they had a good time, I sure hope so I know Jerry and I did.
Posted by Sailor Jerry

Hey Jerry and Crew! Just read a few of your blogs, I found the one about Steve, he told me he was going down there. I COULD have gone with him but I had some family thing I had to do at that time. Anyway next time he comes down I'm coming with him! Keep up the blogging!