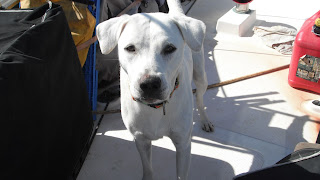 A couple of weeks ago we ran into a young white lab, and our hearts just went out to him.  Now through our travels we have seen many cute dogs that all need help, but this one was different.  So over the last few weeks we, and another couple of SV Oceanair, have been trying to find him a good home.  Well Greg from SV Oceanair has decieded that he would put up the money to get the dog fixed as long as we could find him a home.  One night at Ana Bananas, Barry the owner, had a friend who has also been interested in the dog, he has even followed him around a few times, but he did not have the money to take "Hawk" to the vet and get him all fixed up.  So Greg and I took him to the vet, but he had a bladder infection and needed 5 days worth of pills before he could get fixed, so SOMF to the rescue.  Hawk was allowed to stay on the boat for the time he needed to have the pills, he got along great with Skeeter and even didn't try to eat the kitty that many times. 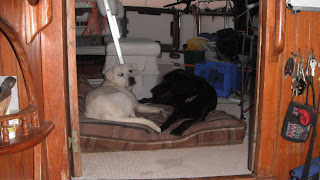 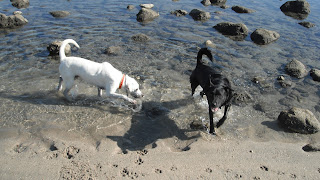 As the five days came to an end, there was even a time when Jerry thought Hawk could be an addition to SOMF, but for when Jerry is out in the Bahia alone, he is just a little big to get on and off the boat with one person.  So after we were finished with the five days, and it was time for us to leave for San Carlos the next day, Greg and I took him back to the vet.  SOMF donated 500 pesos toward the bill and bought some food for home and his new owner.  The vet said that the proceedure would happen the next day and Hawk would stay for 8 days until he could be picked up.  Unfortuently we were leaving the next day to check up on Hawk, but a week later I have emailed JC in La Cruz and he said that Barry and the new owner picked up Hawk and he thinks everything is going good.  Even as I write this email my heart hurts, if it was not for the boat trip to San Carlos and the car ride up to Stockton, I would have taken Hawk in a heartbeat and tried to find him a home.  But that was not the way it worked out, and I thank God that we could be apart of Hawks life and help him get healthy and happy!!!

Aww. That pic of Skeeter with Hawk is adorable!
Maria

I'm teary eyed just reading this. I'm glad he found a home, cuz we would have wanted him too! Mom