We pulled up anchor around 10:30am on Sunday the 13th to head 25 nm south east to Bahia Manzanillo.  We had a great motor down, not much wind, no swell, just an easy 7 hour trip, it was a little longer because we still have not been able to clean the bottom of the boat. 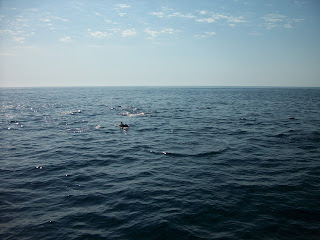 We arrived in Bahia Manzanillo to Las Hadas anchorage in front of there marina and the Las Hadas resort around 5:20 pm, there were about 17 to 20 boats in the anchorage so we ended up have to anchor pretty far out of the little anchorage cove, we thought maybe we would have a lot more rolls, but it ended up not to bad.  Right after we dropped anchor we noticed our friends on SV Cuervo were in this anchorage, we have not seen them since they left La Cruz marina, so we decided to get the kayaks down and go over to visit with them a while.


Las Hadas Marina and Resort was very big, but at we walked around we noticed it was pretty old, but still a nice place.  There were a few restaurants right on the walkway in front of the marina and a few around the other side of the resort, and as you walked farther down there were more resorts and more restaurants.  Now of coarse everything was pretty expensive so we only eat out once at an pizzeria near the marina entrance.

We have not gone into Manzanillo, but we did take a taxi into town a little and whet to Walmart and Auto zone to get some provisions.  We had Dave and Jan from SV Cuervo over for chicken curry dinner one night, we had a great time, Jan made a peach and sour cherry pie, wow was it good.  We love having people over for dinner because if we make the dinner and supply the drinks they other boat usually will offer to bring a dessert and since I don't bake it works out for Jerry who has a very very big sweet tooth.

Jan and I used the pool one day after doing laundry, which by the way was really expensive $60 pesos a wash and $60 pesos a dry about $10 dollars a load.  Jan tried to have the resort do it but they wanted to charge per piece of clothing, $3 dollars for a pair of underwear, I don't think so.  So after we spent our money in their launder mat we decided we deserved to use their pool.  It was great, since the water has been cooler than normal and also the anchorage has this red tied that comes in the afternoon, we have not been doing any swimming so the pool felt great in the heat of the day.
Posted by Sailor Jerry