Guaymas, Mexico finally got a Wal-Mart and a Sam’s club, Jerry and I have gone a few time to the Wal-Mart. I do not think it is anything that we will ever really go to, there is a large supermarket called Soriana that is much more reasonably priced and just as good if not better quality. On Saturday the 10th we went to the Sam’s club for the first time, it was nice for provisioning for the trip we are taking up to Los Cocinas on Monday, but again nothing great. The Sam’s club’s in Mexico are not by the same corporation as the ones in the States, so very different prices and quality, but they did have good deals on paper products and some other bulk items. But the best thing was in the parking lot, not only do the handicap get special parking in the front, but also pregnant women do also. Now not that I have anything against having babies, even though it is not for me, but this is so Mexico, as long as you are having lots of babies you get special parking, or are they also saying they are disabled??? You decide for yourself! 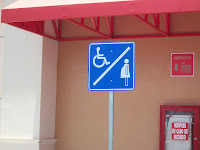 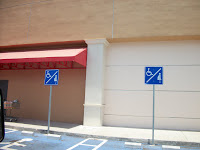