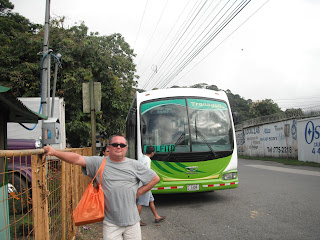 Jerry and I took a bus trip to David Panama to drop off our Single Side Band radio to try to get fixed with Arturo, who Jerry found by some other cruisers help on the Southbound web site.  We first took a $2 taxi to the duty free zone on the other side of Golfito to catch the 7:30 am bus, which was  a little late.  The Bus used to be 650 colones ( about $1.30 US), but the day before they raised it to 1025 colones ($2.05 US), still a great deal for an hour and twenty minute bus to the boarder.  It also seemed to keep the bus not as crowded, since there were two other towns between Golfito and Paso Canoas ( the boarder town), and different buses that when to the other towns that were still cheap, it seemed that unless people were going to the boarder they opted to wait for the next cheaper bus to go by.  The buses were nice, large buses, so the ride over there was not to bad.  Once we got to the boarder and got off the bus, you first have to check out of Costa Rica, which we forgot to do at first so we wasted about 30 minutes waiting in line. 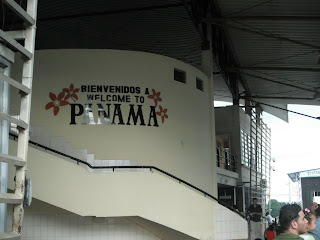 Then you check into Panama, luckly the line was not to long so even with our mistake it took about 1 hour.  We then found a taxi, who spoke english, to try to explain to him where we were going to drop off the radio.  Luckely he had a phone and we had Arturo's phone number, cause we needed it.  David is the capital of Chiriqui Province, it is actually the second largest city in Panama. 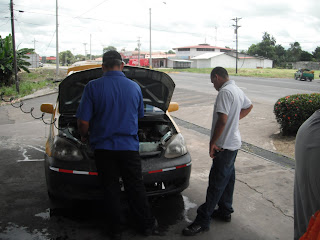 It takes about 45 minute from the boarder and half way there our taxi drivers car started to overheat.  So we pulled into a gas station (where we noticed the fuel prices are much lower here than in Costa Rica), and waited till a friend of his came and picked us up. 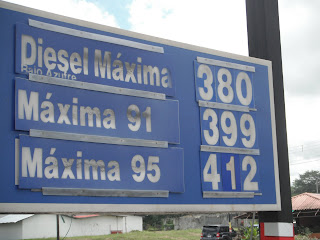 It all worked out fine, he found Arturo's place and we dropped off the radio, now we just hope and wait.  We did not get to see a lot of David this trip, but we know we will be back, so we did some grocery shopping (again the prices are so much cheaper than Costa Rica) and had some lunch at TGIFriday's, yeah it was good to have a good ol buger.  Jerry did get me a new mp3 walkman headset that is water and sweat proof, so now I have no excuses to not go running.  We took a taxi back to the boarder and checked out the duty free zone between the two countries then got back on the bus to Golfito.
Posted by Sailor Jerry