Well we made it to Conception Bay, we are currently in Mulege15 miles from the anchorage and are watching the Giants in the World Series in Scotty's Bar ( el candil) with our friends Kate and Dan from sv Akupara.  We will post pictures and details when I can get on and the Giants are not playing. Go Giants!!
Posted by Sailor Jerry No comments:

Well all of our hard work is about to pay off, we are planning on letting loose the dock lines around 3:00am on Sunday 24th.  Today we have been working on some last minute tie downs and filling the water tanks, and don't forget about the 265 gallons of fuel.  We are planning on heading across to Baja either Punta Chivato or Punta Santa Domingo, either way we need to be in Bahia Concepcion for the World Series.  On that note I need to get back to work so I can go watch game 6 of Giants and Phillies...GO GIANTS!!!  We should have a nice sail tomorrow, winds should be around 17 knots and down to 14 knots on the Baja side. Well happy sailling and next update will be from Bahia Concepcion.
Posted by Sailor Jerry 2 comments:

Trying to get ready! 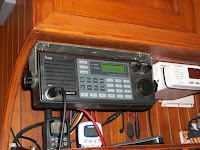 Jerry and I are still plugging away at boat project trying to get ready to leave in a week or so.  Jerry has been busy installing our SSB radio that he got on eBay.  He did a great job hooking up  all the wiring from the radio control in the salon to the main box in the aft cabin and then that going up through the deck to the antenna tuner mounted on the aft deck.  Unfortunately when all this was done and he turned it on it did not work, it would come up with a message in the screen "powering up, wait a moment", well he waited 24 hours and nothing happened.  So Jerry and John went into Guaymas to go find a Icom radio place that could maybe fix the problem.  There were three places recommend to us by other cruisers, so Jerry went to one that seemed very credible.  We printed off the 91 page service manual and he dropped it off, they said it should be ready in 2 days, but that could turn into 2 weeks here in Mexico.  So hopefully it will be ready and fixed on Saturday, then on Monday we can have Randy finish by taking the antenna up the mast. 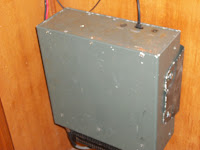 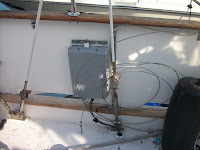 I was supposed to go diving with Marco on Catchalota, but unfortunately something came up for him.  But it all worked out because I say Jenny while out walking Skeeter and ended up going into Guaymas on the bus with her to do some shopping.  Had a great time, but need to remember for next time to go earlier, on our way back at 2:30pm the bus was packed with school kids, I got a seat part way, but Jenny had to stand almost all the way back to the marina.  On Friday I need to start getting serious about cleaning and organizing for our departure.  After being on the dock for so long things have been out of place and we seemed to have accumulated a lot more things, that we probably don't need and definitely don't have room for.  So each day we are getting more excited about leaving and we keep plugging away at our projects, I think we are down to just a few big ones now.
Posted by Sailor Jerry No comments:

Well Jerry and I left 6:30am this morning to go up to the states to pick up some items with a very easy trip across the boarder. We needed to pick up some boat parts and some other mail that we had shipped to us at San Xavier Mexico Insurance Co. also known as Mexico Bob by the locals in San Carlos.  It is a place right across the boarder from Nogales Mexico that accepts mail and packages from places in the US, then people from San Carlos, Guaymas and Alamos areas can come up every so often to bring back down. 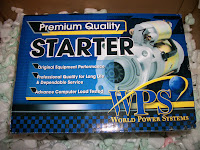 Jerry ordered a generator starter motor, and is hoping we can get the old one fixed somewhere in Guaymas to have as a back up.  When we get back this weekend it will be all work and no play for Jerry as we install the starter, and need to tighten up the belt on the genorator water pump.  Then hopefully with the engine room done we will be able to go out to take some test runs to make sure the generator does not act up anymore.  And that the oil leak gasket behind the fuel pump on the engine is completely taken care of so we can leave later this month for baja to start our journey down south. 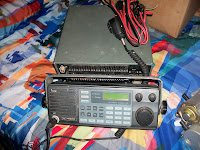 Jerry also got a great deal on eBay for a SSB (single side band radio), this was something that we have been watching for, for awhile.  He attempted to buy one on eBay a couple of months ago but unfortunately was out bid at the last minute.  But he got it this time, after opening up the packing box, it looks like the radio is to be in great shape, it is Icom M800, Jerry already had the antenna and antenna tuner that is needed.  So another project to perfect when we get back, this one will take a little more thought and effort.  We have been brainstorming with many other cruisers on how to do the install. Due to the fact that part is outside and part inside, so a couple of holes will have to be drilled for the tuner wires to go to the radio itself.
While in Nogales, AZ we have taken advantage of getting some things that we have not had in awhile.  We had a great dinner at China Buffet, which ended up being one of the best chinese buffets that I have ever been to, and we also went to Walmart and Dollar Tree.  Tomorrow a few more trips to some store and breakfast somewhere we will be head back down to San Carlos.  Short but productive trip to the States.

Well tonight going to stay in our lovely Motel 6 with a sink full of beer and watch the first game in the series of the SF Giants and Atlanta Braves....GO GIANTS!!!! 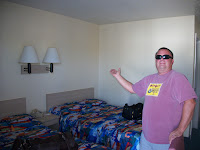 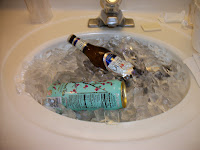 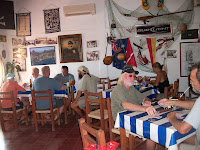 On Thursday Dan and Kate on SV Akupara set up a cribbage tournament at Club de Capitanes, there were 10 participants, which they then set up to be a double elimination.
I unfortunately lost my first two hands first to Herb on SV Synchrony, and then to Jenny on SV Mystic.  Jerry beat Kate, then lost to Dan and then beat Jenny but unfortunately lost to Randy, but he made it farther than I.  Kate and Dan had some little prizes that they gave away to the first and second place winners, they also had a third prize that John on SV Magus won for being skunked two times.
All in all it was a great time, the tournament lasted a little long due to so many of us not knowing how to play the game very well.  So next time we think we will have to only have single elimination, but it was still a very fun tournament.
﻿
﻿
Posted by Sailor Jerry No comments:

Last Wednesday we put on a birthday party for Randy upon Mystic on our boat.  Earlier that day Jerry and I along with 4 other cruisers had a practice cribbage session at Club de Capitanes for the tournament on Thursday.  After a couple of rounds trying to learn cribbage Jenny and I went back to SOMF to get ready for people to come over.  Right after that everyone started to show up, I was not quite prepared since the aft cabin was a total mess from Jerry and I trying to get the boat ready to head south in a couple of weeks, but I picked up and did a quick cleans as best as I could on short notice.  Jerry offered to buy a couple of pizzas and sodas from Jacks Snacks for the party, John upon Magus bought some beers, Kate upon Akupara made a cabbage slaw and Jenny made an apple crisp for the birthday boys dessert.  We had 16 cruisers on the boat, I think everyone had a great time, it was a perfect evening for a party on the aft deck of SOMF.
﻿ ﻿
Posted by Sailor Jerry No comments: