Having fun in La Cruz!!

So we are still hanging out in La Cruz Mexico, having a great time going out to listen to bands, and they had the Taste of La Cruz the last weekend.  Where different businesses came out and had samples of food and drinks for a couple of hours.

Jerry and I really love going on Monday nights to a bar called Ana Bananas, there is a great band that plays 70's and 80's music called The Pacific Rock Band. 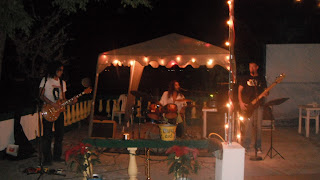 To get you up to date on what is going on on SOMF, Jerry has been still working on the battery problem.  He has taken every cable off, and back on, checked terminals, checked the bildge pump, checked the solar panels and still can not seem to find where the 6.2 volts are coming from.  The Nigel Calder Book say to imagine your electrical system like a water system, you have a tank of water, the battery, pipes that are the wiring, valves are like switches, ect..so we should be seeing a pool of electricy laying in the bildge.
So while Jerry is working hard on the batteries and the watermaker that is acting up, I (not being the best of crew) have been having fun, I went to Sayulita which is a 30 minute, 2 bus rides town away.  It is a very large surfer town, so of caurse it seems right I go with a surfer. While he surfed I had a great time walking around this very new meets old hippy town, with an artist flare. 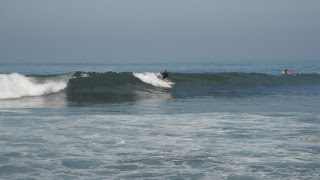 One afternoon I was hanging out on SV Finess (which is a 28 foot sailboat anchored less than 100ft away from SOMF) when all of a sudden Donnie (the owner) came rushing in through the companion way shutting the doors faster than I could ask what was going on.  Looking out the side portholes we could see thousands of bees swarming in the cockpit.  They were so loud, we did not know where they came from or why they choose this boat to try to make a hive on.  But about an hour the noise started to die down so slowly looking out the campanion door we could see them all bunched in the port side cubby hole.  Not quite sure what to do, the first instint Donnie had was to try to get them off his boat so he took a can of carbarator fluid and sprayed the massive swarm.  Well to say the least that pissed them off, they all took off flying, after about another hour or so of being trapped in this small, hot boat we could not hear them anymore, so we ventured out.  We were not sure if they were still on the boat, we had a feeling that they might have moved up under the sail cover, but we were not sticking around to check it out.  I got in my kayak and went back to SOMF, while Donnie went to shore.  That evening I saw Donnie go back to the boat, did not check around, just went inside and lock up.  The next morning I dinghed over to his boat to see if he check to see if they were still on the boat, he said he had not yet but was about to .  So going up to the front of the sail cover, and slowly unzipped it, and WOW there they were, so he jumped in the dinghy and we took off to go see Steve on SV Go For Broke, who we heard was the guy to see if you have questions about bees.   About an hour later Steve was on Donnies boat while we were safely in the dinghy, if we needed a fast get away, but I'll be damn, a couple of hours later Steve had almost of the bees in a box with only one sting on the arm.

After Steve had the box safely taped up, I invited him and Donnie over for a beer to celebrate a victory.  He then went and released the box in a open field far away from the boat, and said that the would find a new place to build a home.  The few bees that were left, would expend their energy and die off.  I have to say that is was quite an experience and thank got it was not on SOMF!!  Great Job Steve!!!
Posted by Sailor Jerry No comments:

While we have been here we have been trying to take care of some of the issues we are having on the boat.  Jerry went down in the engine room one afternoon after calling the Gillete Genorator Company trying to figure out why the the genorator is not genorating any power and why we had that black smoke.  Well we figured out that it was the fan on the back of the genorator and the set screw came loose and that allowed the fan to move forward into the coils causing it to freeze and producing black smoke.  Jerry put the set screw back in place of the fan, started the generator, no smoke but no power, so now we will have to have the whole genorator taken out (which ways 148 lbs) and have the the coils rewound.  So back to using the 1000 watt genorator, so thanks again Dad Wilhite for saving our butts!!


We bought three 6 volt batteries off SV Blue Dolphin here in La Cruz, to add in line with the eight that we have already.  We are hoping that with this addition the solar panels will be able to keep up our house battery bank over night.

When adding the new batteries and new cables that Jerry made up, he got a spark of electricity off of one of the battery terminals (when there should not have been any volts running through).  After testing and testing and more testing of all the batteries and connections we still have a 6.2 volts comming off the ground when all the batteries are disconnected.  We are going to have to do some research of this problem, and will keep you up to date on the prognosis.

I wish to all our friends and family near and far a very Happy New Years, may 2012 provide all your wishes to come true!!  For us on SOMF, we had a very happy new years eve on the boat with our friends Tim and Joan from SV KONA.  Joan brought over shrimp and dip and I made some tortilla roll up sandwiches and a pizza, we enjoyed drinking and eating and playing monopoly on the WII (which I won!!) until ten minutes till midnight.  At midnight we ejoyed the wonderful fireworks across the bay while toasting to good friends and great times with a bottle of champain.

On the Wednsday before we went back to Puerto Vallarta with Joan and Tim walking around downtown!!